When it comes to Office 365 DirSync plays a major role in the deployment which synchronizes your On premise AD objects to Cloud Directory (Windows Azure Active Directory). 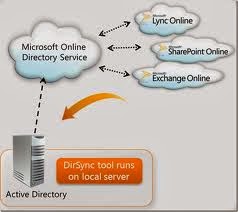 DirSync Tool is enhanced by Microsoft team with every release which provides additional functionality along with major bug fixes and other enhancements, once such notable feature is the Password Hash  and also you can now install the latest version of DirSync on your DC and does not require a separate Server as with earlier version.

Read the below TechNet blog post to know the History of DirSync designed to help you keep track of the versions that have been released, and to understand whether you need to update to the newest version or not.

*Check out this below latest Office Blogs post to know to Synchronize On premises objects to Azure with Dirsync Explained clearly.

Synchronizing your directory with Office 365 is easy

As everyone aware that we can force the DirSync changes before the actual 3 hours window on demand and for this we normally run the "DirSyncConfigshell.psc1" script followed by running the actual "Start-OnlineCoexistenceSync" cmdlet that initiates the sync. With the latest version of DirSync we have a change in this process where we need to Import the DirSync Module and run the Online Coexistence.

Review the below blog post to know the new changes explained with the Guided Walk-through.

One more option explained with steps to perform manual change to the DirSync Cycle is explained in the below post.