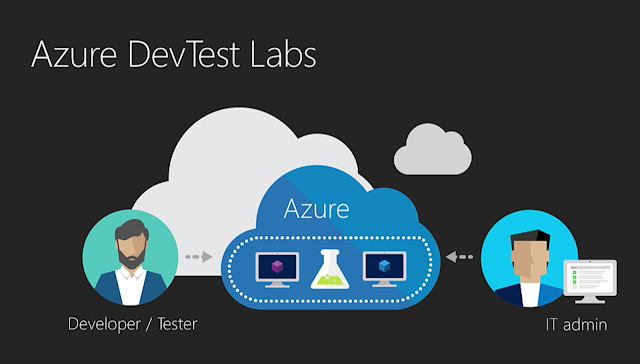 Get to know What is Azure DevTest Labs?

Register here for webinars: Dev-Test Starts with IT

Spin up your test lab environment today and share the feedback, Make sure you review the pricing details before you assign the necessary resources for the Lab.
Posted by Ravikumar Sathyamurthy at Thursday, May 26, 2016 No comments:

Microsoft recently commissioned a study with IDG that looks at the experience of IT pros who have already moved enterprise business apps to the cloud. If you are IT Pro focusing on Cloud Technologies then this real time advice is essential for your Journey to the cloud. 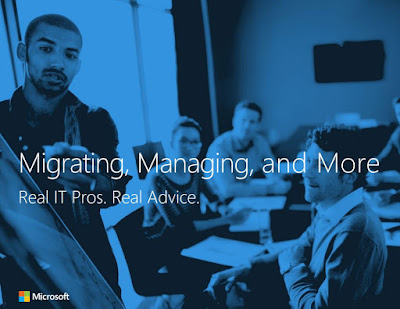 Register and access the e-book here: Migrating, Managing and More: Real IT Pros. Real Advice
Posted by Ravikumar Sathyamurthy at Thursday, May 26, 2016 No comments:

When it comes to Cloud adoption, there is always comparison between the best platform that fits an Organization strategy. Investments made in Cloud are increasing day by day and there is always tough competition exits between different Cloud providers, and when it comes to this evaluation Microsoft Azure vs. Amazon Web Services (AWS) is the hottest topic and both of these Cloud giants are not less than the one another and some Organizations adopt Multi-Cloud approach and takes benefits of both the platforms.

To help customers decide which platform is right for their needs, Microsoft team have created a reference chart to show each IT capability along with its corresponding service or feature in both Azure and AWS.

Microsoft introduced a new cloud service map to help you quickly compare the cloud capabilities of Azure and AWS services in all categories.

Also review the below blog post related to this topic

Stay tuned for more updates...
Posted by Ravikumar Sathyamurthy at Thursday, May 26, 2016 3 comments:

Cybercrime is increasing day by day, data breaches, Credential Leaks, Phishing etc., are now seems to be reported everyday from different parts of the World and every Organization is tightening their security walls using the latest technologies available in the market, but everyday one new breach is reported and even a small hole in your entire security paradigm will make your environment vulnerable to these cyber attacks. 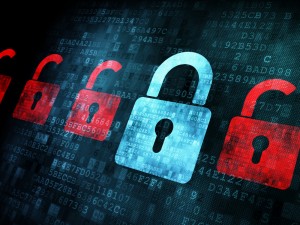 Microsoft team recently published a guidance paper and an AD team blog post that explains today's security threats, and how Microsoft is Managing them with real time examples and best practices that provide IT Administrators with the recommended Password guidance, and the best identity management approach they need to follow and enforce in their environments for better Information Security. 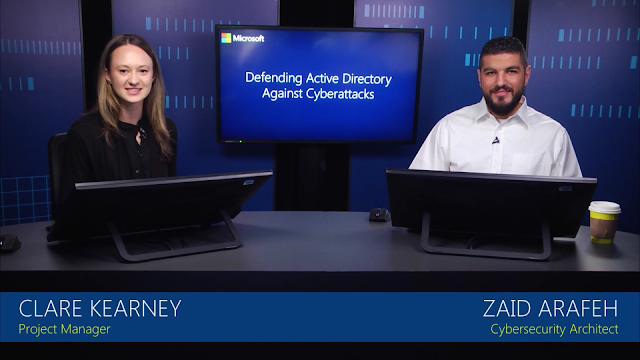 Get to know about PAM and Just in Time Administration here: Privileged Access Management – demystified

Posted by Ravikumar Sathyamurthy at Thursday, May 26, 2016 No comments: 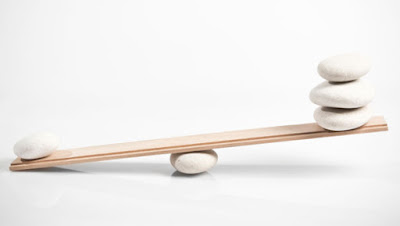 Posted by Ravikumar Sathyamurthy at Saturday, May 21, 2016 No comments: 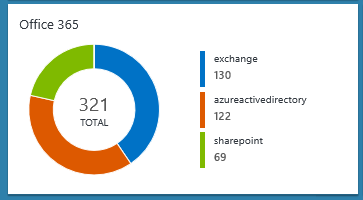 Below are the following types of management activities you can perform:


Data is collected based on the current functionality of the Office 365 Managment Activity API.

A recent article published for Exchange Server 2016 in EHLO Blog

Stay tuned for more updates...
Posted by Ravikumar Sathyamurthy at Sunday, May 15, 2016 No comments: 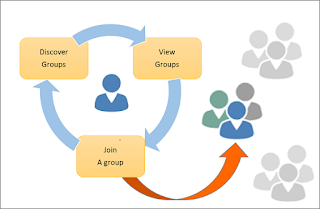 Unlike traditional Distribution Groups, Office 365 Groups provide much more as explained in detail in my earlier blog post curated with references and latest updates "Office 365 Groups Overview, Administration and Roadmap in a NutShell"

I wrote this article today to give a quick refresh on the topic and refer you to the latest support article published that helps you to migrate Distribution lists in Cloud to Office 365 Groups.

You can migrate your Distribution groups to Office 365 groups provided they are Cloud-managed, simple, non-nested distribution lists.

Microsoft team has provided a list of PowerShell scripts that make your migration smooth, You can identify the eligible groups for migration using the Get-DlEligibilityList.ps1 script and refer the table that lists which distribution lists are eligible or not eligible for migration.

Identify the eligibility criteria for the migration and make sure you edit your existing Distribution groups accordingly if you need them to be migrated to an Office 365 Group. 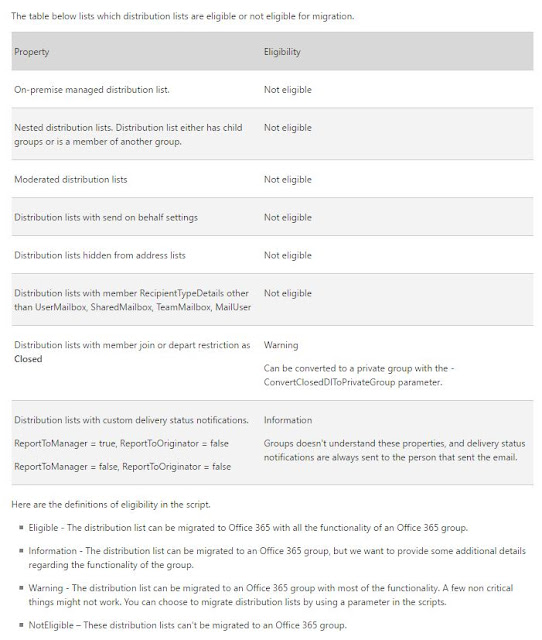 Clear steps to migrate distribution lists to an Office 365 group is available in the support article. Make sure you read the FAQs and Additional Information section.

If you are using the latest AAD Connect to synchronize your identities and your on-premises Exchange servers are Exchange 2013 cumulative update 8 (released in March 2015) or Exchange 2016 you get the benefits of using Group Writeback feature, that allow you to writeback Office 365 Groups as Distribution lists On premises.

Now you have the option to convert a distribution list to Office 365 group directly in the Office 365 Exchange Admin Center.

Stay tuned for more updates...
Posted by Ravikumar Sathyamurthy at Sunday, May 15, 2016 No comments:

Microsoft provided rich set of Support Articles that guides you as an Enterprise Admin to move to successfully to Office 365. 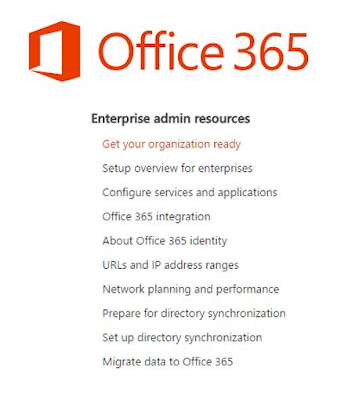 This is the best place to begin your path to Office 365. If you want help getting Office 365 set up, FastTrack is the easiest way to deploy Office 365.
Posted by Ravikumar Sathyamurthy at Saturday, May 14, 2016 No comments:

Microsoft Azure Infrastructure Services provides compelling options for SharePoint disaster recovery environments that are more flexible and less expensive than the on-premises alternatives. This solution model illustrates disaster recovery of an on-premises SharePoint farm to Microsoft Azure Infrastructure Services. Warm and cold standby options are included. You can use the illustrations in this file as a starting point for your own implementation. 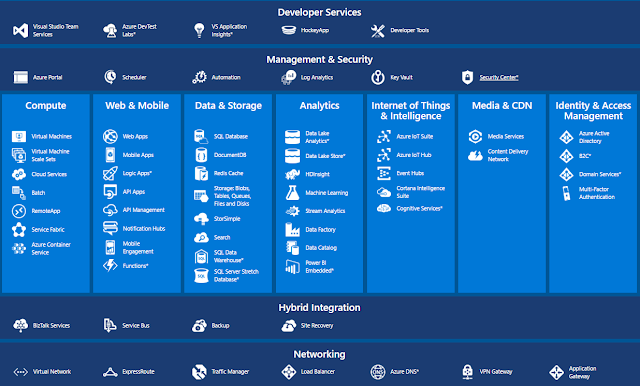 View here: http://azureplatform.azurewebsites.net/
Posted by Ravikumar Sathyamurthy at Saturday, May 14, 2016 No comments:

Microsoft Technologies are evolving and having a Microsoft Certification puts your career one step forward in the Industry. As a Messaging consultant, I was happy to hear the news that Microsoft team had made a significant change in certification Roadmap for MCSE Messaging on which I am writing this post today.

Access the Certification TechNet Page here to know the Roadmap:

As always try to take the recommended Microsoft courses as a first step,

Course 20345-2A: Designing and Deploying Microsoft Exchange Server 2016 (In Development)

The first course, CLD208.1x: Microsoft Exchange Server 2016 Infrastructure, is free. The remaining three courses are for-fee courses, at a cost of $49 USD per course.

Get registered and soon!

As always EHLO Blog is there for your learning and then your TechNet Documentation.

Download the Exchange Server 2016 Trial and setup your own Lab environment which you would always do.

You now have Azure to setup Exchange Server 2016 lab at ease, follow the below guidance article from Microsoft.

Finally, Make sure you get yourself updated through the community channels available globally from experts around the World.

Access the latest Exam Prep session from Microsoft Ignite 2016 below,

As per the latest Microsoft Certification updates, the current MCSE Messaging certification is retiring next year March 31 2017, by passing this exam you will gain your new MCSE Productivity Certification credit if you are already an MCSA Certified in the required criteria.

Believe these pointers are a good start for you to begin your Certification Journey!

Stay tuned for more updates...
Posted by Ravikumar Sathyamurthy at Friday, May 13, 2016 No comments:

Microsoft team released the new Support and Recovery Assistant for Office 365 Tool to address common Office 365 support issues, this is an add-on to the existing Tools and we can expect to see more feature added in the upcoming days. 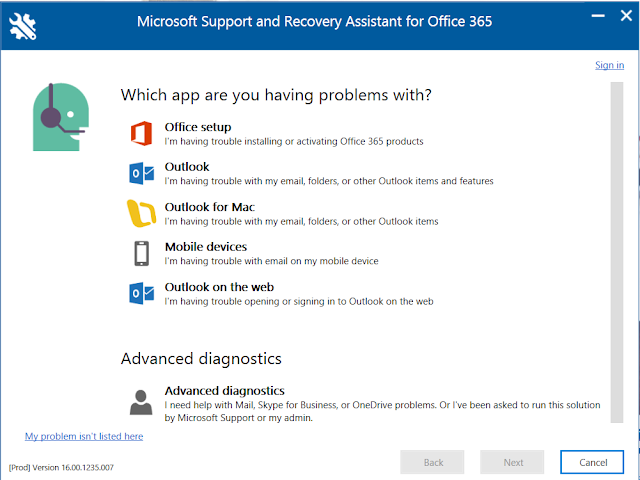 Most awaited SharePoint 2016, Project Server 2016 & Office Online Server goes GA this week. Microsoft team made a huge shift in IT world by bringing lot of innovations in a row to their product line that boosts productivity and business across Organizations.

SharePoint Server 2016—your foundation for the future

Project Server 2016—born in the cloud

Make sure you read The Future of SharePoint post and also watch the On demand Keynote session to know more.

Watch all the Microsoft Mechanics videos on this topic to stay head with the new changes.

Posted by Ravikumar Sathyamurthy at Sunday, May 08, 2016 No comments:

An excellent E-book for IT pros to know more and do more with Windows 10 effectively, written by renowned expert Ed Bott 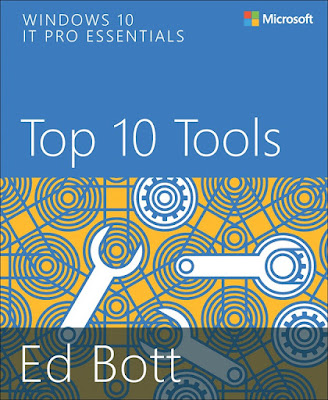 Access the E-book here: Windows 10 IT Pro Essentials: Top 10 Tools
Posted by Ravikumar Sathyamurthy at Sunday, May 08, 2016 No comments:

Email ThisBlogThis!Share to TwitterShare to FacebookShare to Pinterest
Labels: E-Book

Difference between Office 365 and Office 2016

A Nice comparison support article between Office 365 and Office 2016, read the comparison in line with one another and decide which one suits your Organizations' need. 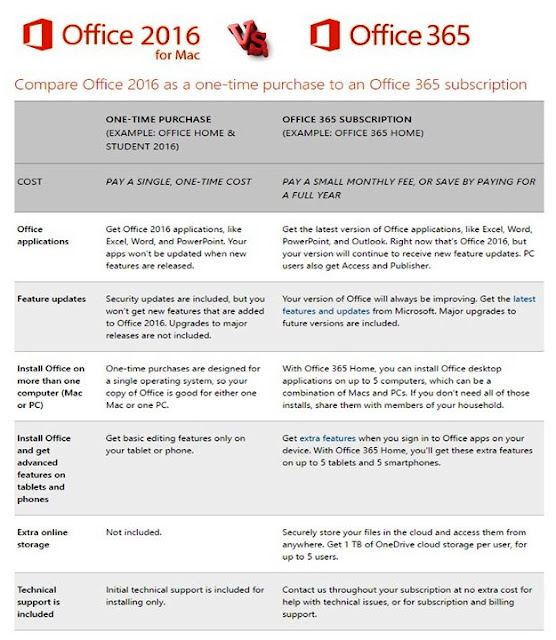 Access the article here: What's the difference between Office 365 and Office 2016?

Posted by Ravikumar Sathyamurthy at Sunday, May 08, 2016 No comments:

Microsoft team has published one more great eBook in series for SharePoint Hybrid Deployment, by reading this eBook you will gain insight into planning, architecture, configuration, and management of SharePoint hybrid. This book covers foundational topics with which you will learn more about Office 365 and Microsoft Azure, architecture planning, platform hygiene and preparation, directory synchronization, and how to configure a seamless single sign-on experience for users. 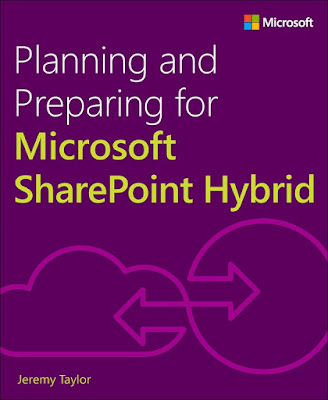 Download the eBook here: Planning and Preparing for Microsoft SharePoint Hybrid
Posted by Ravikumar Sathyamurthy at Sunday, May 01, 2016 No comments: